If you could live anywhere in BC, where would you live? To help you answer this question, Zolo Homebase has compiled a list of Top Most Affordable Cities in BC. The ranking considered cities of more than 100,000 people and considered three factors when coming up with a score: housing affordability, economic strength, and potential for growth. Analysts determined which cities to examine and rank based on the data collected by Statistics Canada in the 2016 Census and recognized that housing affordability and opportunities for well-paying jobs were the biggest determining factors. The home-to-price ratio is based on average home prices from the most current market trends data from Zolo (May 2021) compared to the average income for either households or single-income earners. They also factored in the general quality of life in the respective cities. We’ve decided to focus on the top 5 most affordable large cities in BC to help you narrow down your best choices. These 5 cities represent a diverse selection of the province’s communities. And with the housing market so volatile, it might be good to know where to look without breaking the bank. Take a look below at the 5 most affordable large cities in BC: 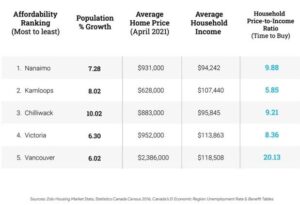